Official trailer and screenshots are out and viral all over the internet. Damn! The artwork is fascinating.

As discussed before, Genesis is expanded into two parts. According to the trailer it is clear, the part one will release in December 2019. On the other hand, there are no fixed dates for the second part, may be it will release in the mid of 2020.

ARK: Genesis is compatible on PS4, XBOX and Steam. Yes! PC gamers can also enjoy this fascinating game. Moreover, pre registrations, trailers, and screenshots are available on the steam. Go check them out!

Where Genesis fits in the ARK timeline?

In the official trailer, there is no such glimpse of the map, which will indicate where the genesis is. However, the trailer gave some hints of the new timeline; volcanic regions (fire busting), snowy mountains with scary wolves.

Moreover, in the previous version you may have experienced a specimen implant on the players arm. However, in the Genesis trailer there was no such thing as a specimen.

After the release, you have to speculate on your own that where the genesis is available in the ARK timeline. Explore the map and you will figure out many amazing features.

Say Hello! To your Artificial companion

It is hard to survive in the ARK alone, the timeline is massive and it is easy to get confused. In ARK: Genesis, Helena has developed an AI bot for you, HLN-A. The AI will guide you the route, provide you all possible information about the missions, and tasks.

Helena will personally assist your player in situations where the AI is not helpful.

HLN-A will also warn you from upcoming threats. A skull hologram will appear on the AI whenever danger is near. Moreover, it will appreciate your player with thumbs up whenever you will perform a task or complete a mission.

Cannot wait for HLN-A to assist you? Then do not wait, those who will pre-purchase the Genesis, will immediately get HLN-A in the current version. All the features of HLN-A will not be available for now but still she is quite helpful.

After the release of Genesis you can customize HLN-A.

An epic location where you can build your new base 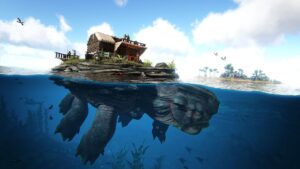 In ARK: Survival Evolved, your player has to settle down at one spot on the map. It was quite hard to build a base repeatedly. Therefore, Studio Wildcard came up with an amazing feature. Now, you have giant sea turtles in the ARK timeline.

Tame a turtle and it will become your ride. Later on, your player can build a base on its shell. Moreover, the turtle can swim and dive in the water along with your base. Do not worry you player would not die, the base and player are protected and oxygenated by the turtle.

You will also find some valuable resources on the turtle’s shell. Do not leave them behind. 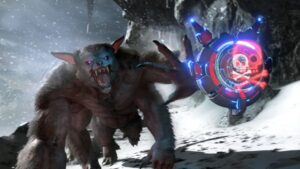 The names of all the dinosaurs are not officially released yet. However, the trailer gave a glimpse of few new species of dinosaurs. An epic and terrifying volcano lizard, who is specialty, is to spit pile of lava to the enemy. Moreover, the AOE attack of the volcanic lizard is also emmense.

The giant sea turtle is also an addition in the new dinosaurs. (Discussed about it earlier).