Ark Survival Extinction PvE places survivors on an Element-infested, ravaged planet filled with fantastical creatures both organic and technological. Earth holds both the secrets of the past and the keys to its salvation.

On the Ark Survival Extinction PvE map, set on Earth rather than an ARK up in space, forces players to survive an Earth unfamiliar to us: one of strange features and stranger creatures.

In the centre of the map lies an abandoned city, usually referred to as the Great City or Sanctuary. It is the remains of some great technologically advanced civilization, the same one that built the ARKs. Outside of the city borders, pockets of life can be hard to find among the corrupted wasteland. They are still there, however, in the protective borders of the Proto-ARKs.

To the south, the desert Proto-ARK exists. To the north, the Snow Dome, a second Proto-ARK. Another exists to the northwest, called the Sunken Forest, which was supposed to be another ARK but failed when it collapsed into the ground, presumably due to there being a large sinkhole underneath it.

Strangely enough, the Proto-ARKs represent past challenges the survivor has faced: the Sanctuary and Snow Dome vaguely representing The Island, the Desert Dome representing Scorched Earth, and the Sunken Forest bearing similarities to Aberration.

Despite being called ‘dead’ this Earth may be more alive than we first thought, but with life we don’t understand. 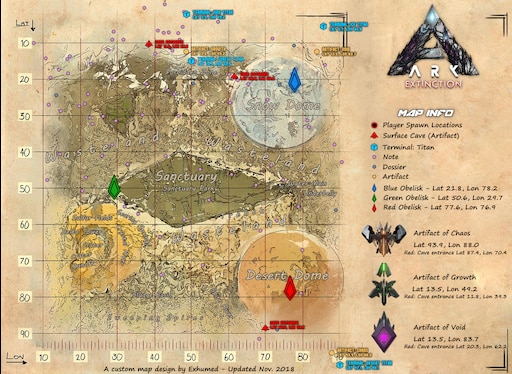